Lessons from a Short Trip to Iqaluit 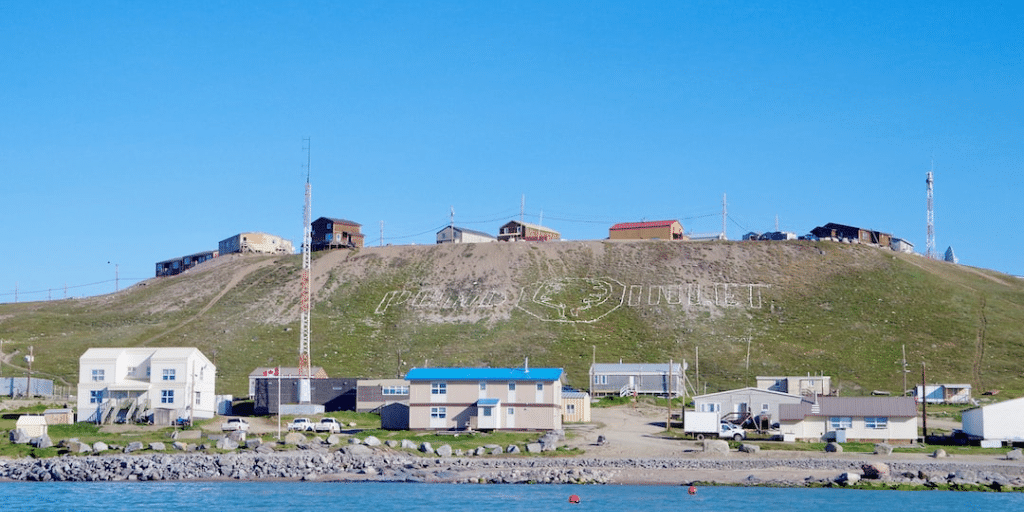 My flight from Ottawa to Iqaluit is delayed from 8AM to 11:45AM.

It makes sense that the primary delay is due to ice. Passengers are later informed of a further delay to take on extra supplies.

YOW is deserted. No line to get through security, no line for coffee. A barista remarks this is “the calm before the holiday storm”.

Passengers waiting for the flight to Iqaluit are a multi-cultural, multi-ethnic cross-section of Canadians. Not the group of arctic researchers and Inuit one may (wrongly) expect to find travelling to Iqaluit.

Aboard the plane, flight instructions are in 3 languages: French, English, and Inuktitut.

I’m seated next to Sherene Gissing, Early Childhood Development Manager for Nunavut. I learn she is originally from South Africa, met her husband at a game park there, and eventually moved to Iqaluit and the surrounding areas. They have 3 children, one of whom is training for the Canada Games in Judo.

She is grateful for Canada and grateful, in particular, for the North. For the opportunities it has provided her family. For its tremendous natural beauty. For the outdoor lifestyle she and her family enjoy.

She tells me that people either love or hate the North. I resist a reflexive urge to inquire whether that means it is “polar-izing”.

The 3hr flight evaporates into the cold, arctic air. We arrive at 3PM in total darkness.

Iqaluit International Airport might as well be a space station. Dynamic, modern architecture enveloped by arctic tundra. To de-plane here is to venture into another world.

That changes the moment you walk through the doors. The cold and harsh reality of the arctic landscape could not be more perfectly juxtaposed by the warmth and conviviality of its people.

The Frobisher Inn (or, as it is known locally, the “Frob”) doubles as a movie theatre, grocery store, pharmacy, hair salon, and Government of Nunavut offices.

Shortly after I arrive, Alison Crowe, a local criminal defence lawyer, invites me to dinner at her beautiful home in Apex, just outside of town. She says it is important to see how locals live, and to appreciate what life in Nunavut is really like. I’m also greeted by her dog “Kamik”, a fun-loving “Iqaluit special”.

Alison is a strong, dedicated, knowledgeable, and perceptive advocate whose career has literally taken her from coast-to-coast-to-coast. A more gracious, interesting, and engaging host, you could not ask for.

I take a taxi from Alison’s back to the “Frob”, and recognize the driver’s name, “Michele Verrelli”, is Italian. I tell him that I have Italian ancestry; that my last name is “Giordano”.[1] He smiles and tells me that “a guy called Tony”, himself, and I are the only 3 Italians in Iqaluit. He also says a good espresso can be found at the Black Heart Café in town. I learn that, for Michele, others can have the beaches and palm trees. He prefers the Northern Lights. Like Sherene and Alison, he is grateful for life in Iqaluit.

The next day, December 6, 2022, is no typical Tuesday. I’m in Iqaluit for two reasons. First, to be called to the Nunavut Bar. Second, to deliver a suitcase filled with 45kg of food, snowsuits, hats, and thermal socks to the Qajuqturvik Community Food Centre.[2]

Wake up in the dark, pack up, and catch a taxi to the Qajuqturvik Community Food Centre. I carry the heavy suitcase up approximately 15 iron steps to the front door. An invigorating workout against the pale morning sky. The sun only begins to rise again at 9AM.

“That guy from the South”, as they call me, has finally arrived. We open the suitcase and quickly shelve the items. I learn that the Qajuqturvik Community Food Centre feeds 350 people. Each and every day. Such is the need of the community.[3]

The call to the Bar is scheduled for the early afternoon, so I ask to spend a few hours at the Centre. The experience affirms my belief that the best parts of life often begin by asking a simple question: “what I can do to help?”

In this case, the answer to that question is spend a morning with the Qajuqturvik Community Food Centre team, preparing kale salads for the lunchtime meal and watching the sun rise over the soft cascade of the mountain range that rises across the bay. The snow spins and churns over the peaks, as though the entire range were a colossal snow globe.

Before I leave, I ask to take a group photograph.[4]

A wonderful collection of people. They are proud of what they are doing. For many, “it does not feel like work”, they are simply doing what they can, with what they have, in service of their community. After the photograph, the group ask what kind of lawyer I want to be. The question sticks with me. What kind of lawyer do I want to be, anyway? Being called to the Nunavut Bar is an opportunity to explore that question.

Since 2015, I’ve been a lawyer, now a Partner, at Supreme Advocacy LLP. We’re appellate lawyers, helping mostly other lawyers and their clients at the Supreme Court of Canada and in Courts of Appeal across the country. With limited exceptions, the majority of my time is spent writing, editing, or otherwise contributing to the production of specialized persuasive documents for seeking Leave to Appeal to the Supreme Court of Canada – principally, a document called the “Memorandum of Argument” – and, thereafter, Factums at the Appeal stage. Practising in the forum of the Supreme Court of Canada affords one the chance to work on cases originating from every Province and Territory in Canada, and on virtually every legal subject in Canada – as Eugene so often puts it, everything from “A” to “Z” (from Agriculture to Zoos – really; we’ve done both).

The basic task of writing a “Leave” (as we call them) or a Factum at the Supreme Court of Canada is to take the complex and contentious legal issues raised by the decisions of the Courts below, and your client’s position, and to make them as clear, simple, and interesting as possible. That is the great lesson of appellate advocacy: the law is for everyone. It must be accessible.

As a consequence, whatever kind of lawyer I am (or will be), as a writer, or in making oral submissions before a Court, my manner of writing and speaking should also be for the team at Qajuqturvik Community Food Centre.

And that’s the kind of lawyer I wish to be. One who advocates, clearly and directly. In writing and by way of oral submission, in whatever appellate forum I may do so, and wherever I may contribute to the just resolution of the matter.

In the afternoon, I was proposed for admission to the Nunavut Bar by Anne Crawford, and took the Oath before Chief Justice Sharkey of the Nunavut Court of Justice.

In litigation, I’ve learned that going “first” is often an effective way to set the tone, and to frame the issues of a case. Importantly, Chief Justice Sharkey was the first lawyer called to the Nunavut Bar, in April of 1999. It is no surprise, therefore, that – without exception – the lawyers I met in Nunavut were warm, welcoming, and highly intelligent.

The tone has been set by the Chief Justice and, indeed, by Anne Crawford. Both of whom are supremely dedicated to their community and to the wider profession. As a couple, and in their own right, they exemplify the best of what the law can be, and the best of what I experienced during my brief stay in Iqaluit.

After I’d taken the Oath, the Chief Justice gave me the honour of a brief “last word”. I solemnly promised the Chief Justice (and Anne) that, with this call to the Bar, I re-dedicate myself to the practice of law, to providing the very best legal service that I can, and to serving my community – a community which now includes all those I had the great pleasure to meet in Iqaluit.

And it all starts with a very simple question: “what can I/we do to help?”

[1] My “Nonno”, Domenic Giordano, and Grandfather, Ludovico Mattiussi, were from the Calabria and Udine regions, respectively. My “Nonna”, Lina Giordano, is also from Calabria, while my Grandmother, Jeanne, is French-Canadian. Her family, the Proulx, can trace their roots back over 300 years on Canadian soil.

[2] Among other reasons, it’s our firm’s way of saying “thank you” to Anne Crawford, who kindly agreed to sponsor my admission to the Nunavut Bar.

[3] Should any readers wish to contribute in any way, you can contact the Executive Director, Rachel Blais, at 867-979-4863 or by email at rachel@qajuqturvik.ca.

[4] Included with this document.