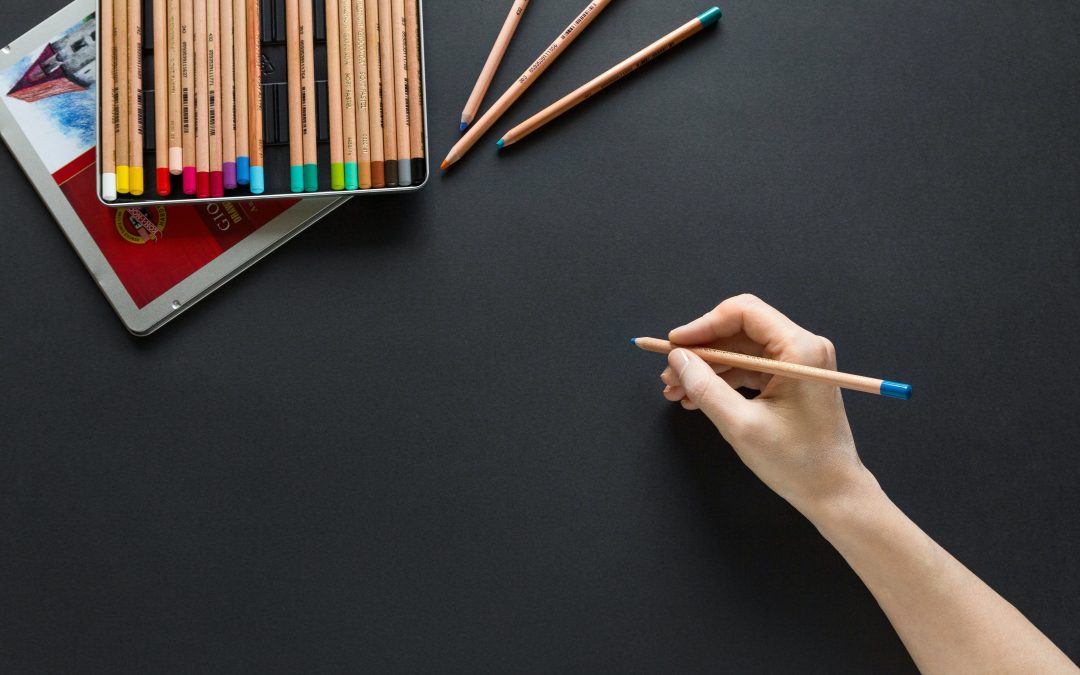 Lauren Foster-MacLeod recalls how she liked to draw detailed faces and vivid scenes in her sketchbooks as a teenager.

Her ability to captures facial features allows the public to see the people and the moments that play out in courtrooms, where cameras are usually banned and sketches must set the scene.

Court sketch artists like Foster-MacLeod’s produce some of the most iconic, memorable drawings that appear in newspapers, online and on television. She is one of the two main court sketch artists in Ottawa that cover the courts regularly.

Foster-MacLeod, who is a freelancer, got her start by contacting multiple media outlets to inform them she was for hire. It took a decade, and a lot of going to court to practise, before she finally got a phone call from CBC.

“You go in pretty cold,” she says of her gigs. Also, time can be tight to capture the accused on the witness stand, she says of the adrenaline-inducing environment. Working on tight deadlines becomes even harder when most news outlets want sketches to be in colour, she says.

Foster-MacLeod uses pastel pencils, but this requires her to spray the pages with fixative to create layers and avoid smudging.

She starts her sketches in the courtroom but tries to complete the rest of the sketch in the courthouse cafeteria, while running back-and-forth from her car to spray her sketch. She then goes home to scan and send the sketch to the news organization that requested it.

Along with her portable set of pastels and spray, is her trusty pair of binoculars.

“Having binoculars means I can see the little details,” she says. They can really help, she says, when some key players may be appearing via video on a screen placed at the front of the courtroom. 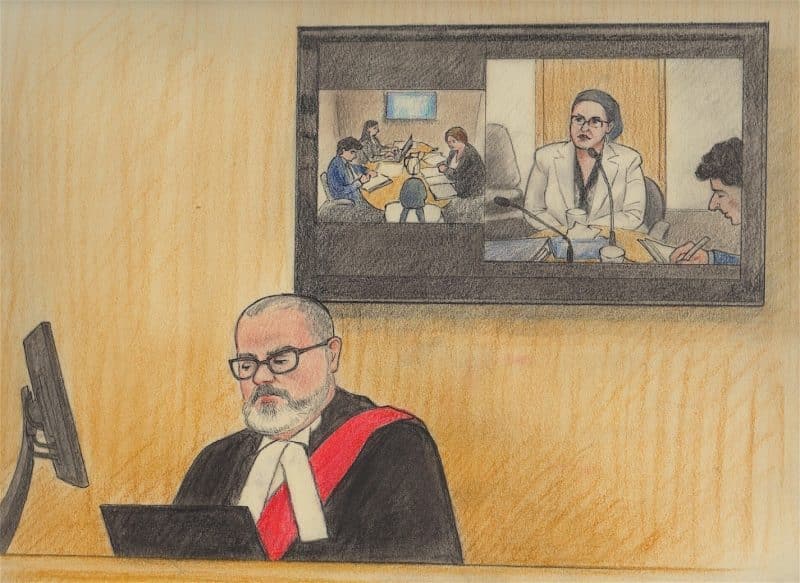 This was the case in the Joshua Boyle trial that Foster-MacLeod covered last year.

Boyle faced various assault charges against his wife, Caitlan Coleman, that allegedly occurred after the couple returned to Canada after years of being in captivity in Pakistan.

“You have to sort of squeeze people together to get them all in one drawing. I just draw them the way they look. Sometimes you don’t have the greatest angle,” Foster-MacLeod says. 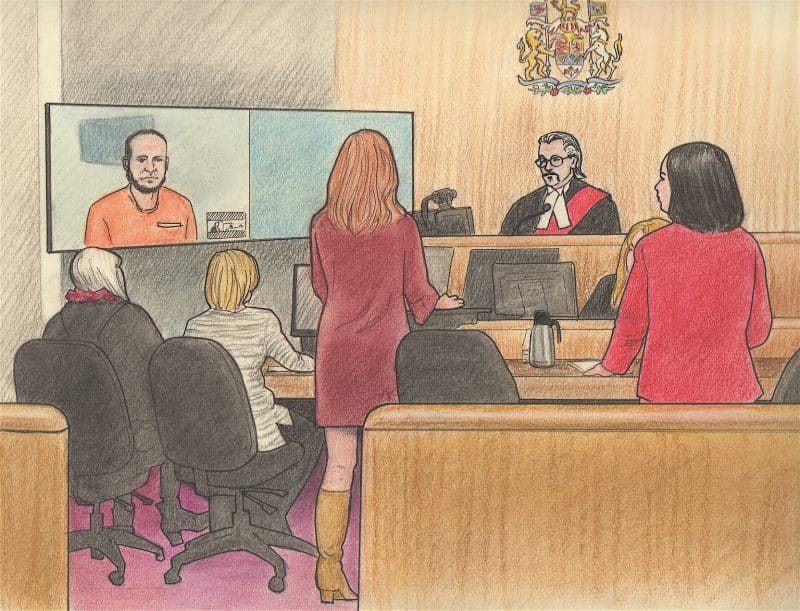 Although the job is fast-paced, it’s not lucrative, and many court sketch artists like Foster-MacLeod have other work they do in addition to court sketching.

“You’re never going to make a living at court sketching in Ottawa. You can go months with nothing,” she says, noting the various other forms of artwork she does in addition to court sketching.

Working in advertising as a commercial storyboard artist, Banning sketches courtroom scenes when he has the time.

“If I’m busy I usually turn it down. It’s not a money-making career. It’s something I do to get out of the office,” says Banning, who has been sketching court scenes since 2007.

Living in Stittsville, he jokes that the couple hundred dollars he typically receives “pays for gas and a lunch.”

Banning’s approach to sketches is different than Foster-MacLeod’s, despite them both starting with a pencil sketch.

After Banning’s initial sketch is complete, he scans it onto his computer and adds colour to it digitally using an application called Corel Painter, which replicates real artist tools such as water colours.

Banning, like Foster-MacLeod, often finishes his colour transformation in the courthouse cafeteria. He totes his notes about what people were wearing, including the colour of their hair or clothes.

These little details were noticed by many Canadians during Banning’s sketches of the notable trial of Sen. Mike Duffy in 2015. 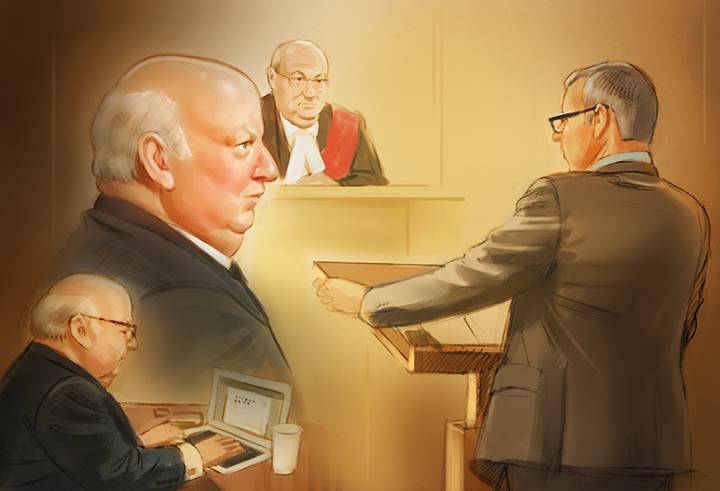 Banning incorporated the hand gestures Duffy made on the stand into his sketches, which he produced from the jury box to get a good view.

“You see a different kind of composition than you see if you just take a photograph,” Banning explains. “I have carte blanche to sort of draw what I see compared to what I do on a regular basis where I have art directors and designers telling me what to do. This kind of gives me a bit of freedom.” 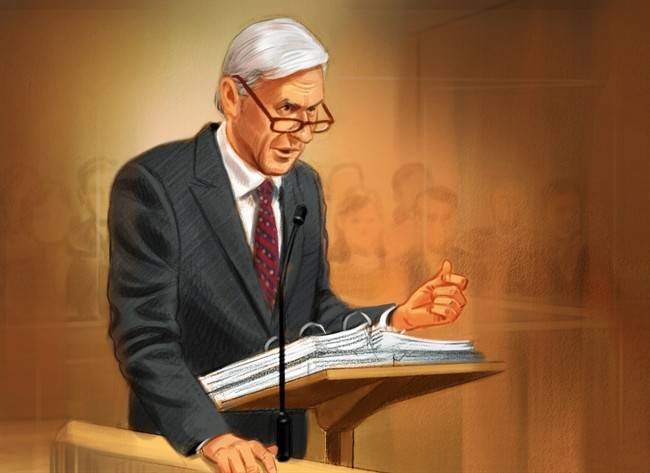